The Buffalo River’s history as America’s First National River began in 1972 but the history of the river began long before that.

The Buffalo River National Park Region began forming hundreds of millions of years ago. During the Paleozoic Era, sediments were deposited that would eventually form the bedrock for the region. The oldest rock visible near the Buffalo was deposited about 480 million years ago and 300 million years ago the youngest rock, found on the highest mountaintops, was deposited. Erosion over millions of years formed the valleys and revealed the layers of rock, fossils and impressions of extinct marine life that are visible today. 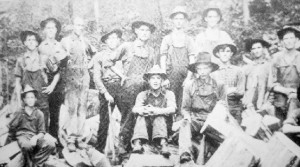 Living on the Buffalo

Evidence suggests prehistoric Native Americans were living near the Buffalo River around 9500 BC. Hunters and foragers, they lived in small groups until about 3000 BC. Their unique chipped stone points have been found all around the Ozarks and in the Buffalo River’s watershed. Sometime after 3000 BC, these small groups began building homes and settling in. Camps near Erbie and Rush, discovered in the 1980’s, reveal conical shaped homes, clay plaster, pottery fragments and animal and plant remains. Around 900 AD, Native Americans began to rely more on cultivated crops and became more sedentary. Evidence of camps discovered near Rush and in Boxley Valley showed maize (small corn), rectangular structures, fishing kitchen refuse and storage pits, and small points made for arrows called “bird points.”

From 1500 to 1700, there is no archaeological record of people occupying the area. Tree ring data show that the Ozarks suffered a prolonged drought between 1560 and 1590 which may have made it difficult for people to live in the area.

In the 1700’s the Osage Indians hunted the lands of the Buffalo River Region and by 1818, the Osage had given their lands over to the U.S. government. The area was set aside for the Cherokee Indians who were thought to have established a settlement called Sequatchie on the lower Buffalo. By 1828, Native Americans were moved to present day Oklahoma and Europeans began to hunt, trap and settle the area moving up the White River. A land grant in 1793 records the area as Cibolo (Spanish for American buffalo) providing the first recorded time the area was named Buffalo. Few settlers in the early 1800’s filed for title to land. Many were poor or just moving through the area on their way to someplace else. By 1860, around 8000 people lived in the Buffalo River area.

Civil War in the Ozarks

During the Civil War era the Buffalo River Valley was split with sympathizers to both Union and Confederate cause. Caves in the Buffalo River area were controlled by the Confederate army from 1861-1862. Control of the caves meant they could harvest bat guano which was an important ingredient used to make gunpowder. By 1863, the area became a safehaven for bushwhackers and deserters due to the rugged terrain. During this time, many of the homesteaders who occupied the area moved to avoid danger until the war’s end.

Living Off of the Land

Families who had acquired land in the Buffalo River region had to work hard to make it. The land provided plenty of food but it was difficult for those families to make money. Many farm families grew cotton and some harvested pharmaceutical plants like goldenseal, genseng, sassafras and slippery elm to sell to dealers. Mining yeilded lead and zinc ore and was a lucrative business from 1890-1918. Following World War I, mining towns began their decline. What remains of the most productive zinc mine in northern Arkansas can be seen at Rush Creek. While ore could not be productively transported by the Buffalo, timber could. Cedar logging took place all over Newton County with crews cutting all winter and shipping logs down the river in the spring. Many of those logs would eventually become Eagle pencils.

During the depression, many families were starved out and from 1930-1960 the areas population continued to fall. It wasnt until better roads, improved industry standards and more sophisticated industrial equipment made the timber business viable again. Today, many of the people living in the Buffalo River region retired to the area or make a modest living catering to recreationists.

Due to the Buffalo River’s connection to the White River, many proposed  to dam and develop the Buffalo over the years. From transportation of timber to hydroelectric power, the Buffalo River was not appreciated as a free flowing river by the government until the 1960’s. There were many proponents to keep the Buffalo as a free flowing river including well known artist, Thomas Hart Benton. Benton was an annual visitor to the Buffalo in the mid-sixties and wrote to the Corps of Engineers imploring them to, “let the river be.”  In 1972, the National Park Service acquired land along the river and today they protect the park and its resources for the enjoyment of all.

The Buffalo River has witnessed peoples stories and adventures for centuries. Because so many people valued the free flowing Buffalo River, we can enjoy today. Find your adventure on the Buffalo National River.