Bill Bowden
Blake Bowers of Conway helps his son Jordan, 4, adjust his binoculars Saturday while Bella Bowers, 5, already has the Boxley Valley elk in sight from the back seat.

PONCA — Autumn in Arkansas means football, fall foliage and the rutting of the elk.

Every fall, elk watchers travel to Boxley Valley, along Arkansas highways 43 and 21 in Newton County, where herds of elk shed their fear of humans and graze in the open pastures along the road at dawn and dusk.
Click to Read More 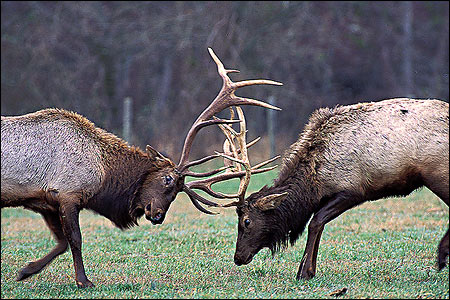 Situated in the northwest part of the state, the Ozarks are the perfect destination to explore the outdoors and take in the beauty of autumn’s palette of bright golds, reds and oranges. The transformation begins around the second week of October and peak colors appear by late October. One of the top spots to view the foliage is in the Buffalo National River area around the small town of Ponca. This beautiful wilderness destination in the mountains offers the opportunity to disconnect and get away from it all. While here, take time to hike or float down the river all the while keeping an eye out for wild elk. Fall is when the bulls are battling to become king of the herd, so they’re especially active during this time of year. Plan to reserve one of the cabins in the mountains above Ponca. Vantage points from these properties yield incredible stargazing opportunities, as well as memorable sunrise and sunset views.

Join Abby Burnett, author of Gone to the Grave: Burial Customs of the Arkansas Ozarks, 1850–1950, as she presents “Cemeteries and Grave Art Along the Buffalo River.” Cemeteries along, and near, the Upper Buffalo River contain examples of now-vanished burial customs, brought here by white settlers as early as the 1830s.

In addition to grave houses, tent graves, and coffin-shaped grave coverings, early tombstone makers created beautiful, detailed artwork on headstones. This talk will provide a virtual tour of cemeteries along the river, highlighting some of the customs and the carvings found there. This in-person program is hosted in collaboration with the Ponca Nature Center. Pre-registration is not required. For details, click https://shilohmuseum.org/museum-events/cemeteries-and-grave-art-along-the-buffalo-river/

The Newton County park will focus on the community’s history, which includes being the site where a block of marble was quarried, carved and transported to the nation’s capital in 1836 and was one of the first stones to be incorporated into the Washington Monument, according to the presentation. The area also has been a health resort featuring the waters from a local spring.

See Buffalo River through the eyes of Thomas Hart Benton

As Told through the Jolin Globe

I promised to tell you stories about the river this year, and July 4 seems like a great time to tell another, because besides being America’s first national river, protected in 1972, the Buffalo is as red, white and blue a place as you can get. It passes at least two named Red Bluffs, ends at the White River and flows through numerous named Blue Holes. Add to that the bald eagles. We saw them every day of our recent float. And with numerous prehistoric and historic sites along the river listed on the National Register of Historic Places, the Buffalo preserves not just the river, but many American stories.

My journey this time included another challenge: Find the Benton bluffs — those river bluffs painted by Neosho-born artist Thomas Hart Benton, whose art today can be found from the Missouri Capitol in Jefferson City to the Metropolitan Museum of Art in New York City, from Crystal Bridges Museum of American Art in Bentonville, Arkansas, to the National Gallery of Art in Washington, D.C.

Benton spent a lifetime floating — and painting — Ozark rivers. He first visited the Buffalo in the 1920s, and returned many times over the next half-century. He also lent his name and talent to the fight to protect the river from dams in the 1960s.

At one point during the fight, Benton wrote directly to the U.S. Army Corps of Engineers: “As a lover of the great scenic beauty of the Buffalo River, I would like to add my name to those others which are lined up in protest against plans to put a dam across its waters. …

“Man, hog-tied as he largely is, with the steel tentacles of an increasingly mechanistic world and with the prospect of being tied ever tighter, needs some areas of escape, of escape to the natural world from which he came. He’ll need all the more of these in the future. The Buffalo River provides one of these areas. I say, and I intend it emphatically: Let the river be.”

Over the years, Benton painted numerous scenes along the Buffalo. Many are unidentifiable bluffs, but others are known.

Benton sketched a view from the Goat Trail on Big Bluff along the Upper Buffalo, but the upper river was already low when we arrived for our float, so we spent the next four days floating what turned out to be 49 miles down the middle river. That stretch was a Benton favorite.

“The most beautiful rivers for making drawings and paintings are these rather small ones, with their bluffs in Missouri and Northwest Arkansas, like the Buffalo, which is one of the most beautiful in the United States,” Benton has said.

The float began at Ozark, and not long after putting in we came upon Welch Bluff, distinguished by a visible geological fault in the face of the bluff, notes Ken Smith, author of “Buffalo River Handbook,” a guide to the river. It was Smith’s book that made it possible for me to pinpoint Welch and another of the river bluffs Benton painted.

Next up was Benton’s painting of the Narrows. The Buffalo eroded one side, and Richland Creek the other, leaving a rock wall that from either side looks like a bluff, but is actually stands up like the fin of a fish. Climb to the top of it and you can see over both the Buffalo and Richland Creek valleys.

“I particularly like this section of the Buffalo because these dramatic rocks are isolated. There are just as dramatic rocks in other places, but there are so many of them you can’t single it out. This one stands out like a monument,” Benton said of Skull Bluff.

It is the background for two of his paintings, one titled “Fishermen’s Camp,” painted in 1968, that recently sold at auction for $1.38 million; the other is “Fisherman’s Camp No. 2,” which is in the Whitney Museum of American Art in New York City. It is a slightly different camp scene.

Right after that is a bluff that, according to Smith, is called Benton Bluff, named for the artist, and it is another bluff he says is featured in a Benton painting, although I have been unable to match it up with any of the Benton paintings I have seen.

Our final Benton site on this float was Peter Cave Bluff, another easily recognizable landmark on the middle river just upstream from the Baker Ford access.

You can find Benton’s river paintings at many of the nation’s museums already mentioned. But go one better. Paddle the Buffalo yourself this year and see the real thing.

Adventures in Arkansas: Plan a Trip to the Ozarks This Fall

Bordered by multicolored bluffs and tucked deep in the deciduous forests of Northwest Arkansas, a ribbon of rapids and pools reflects the Americana charm and natural splendor you can find only in the Ozark Mountains. On either side of the cool, free-flowing river, hollows flanking the water conceal outtakes from another time—from prehistoric sites dating back thousands of years to untamed wilderness and waterfalls left wholly untouched. On the Buffalo National River, 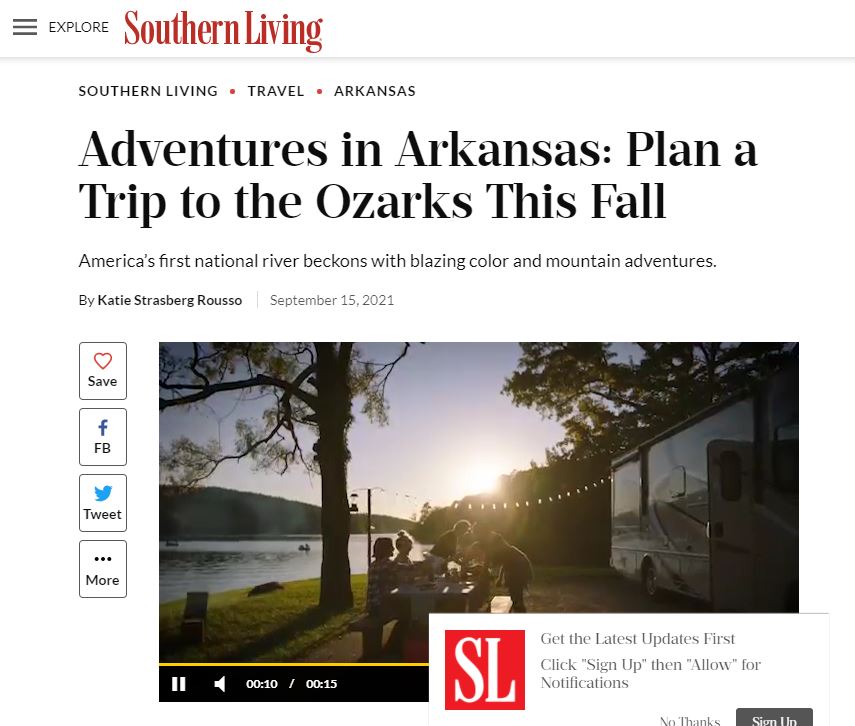 Learn more about Elk, Eagles, Bird Migration and the Wildlife viewable over the upcoming winter months on the Ozarks Plateau

The Tall Pines Inn on Highway 62, as confirmed by Loblolly Pines Adventure Camp and The Inn of The Ozarks have registered a sighting over the past three weekend of a Black Bear in West Eureka Springs.

If hiking in the area – please be aware

Buffalo National River is Re-Opening in a limited Fashion

Buffalo National River Activities are limited to Slow the Spread of COVID-19:

The Buffalo National River is reopening for some day uses next week after the national park was closed because of the coronavirus pandemic.

The National Park Service announced Tuesday the park will begin to reopen May 15 for recreational day use of the trails and the Buffalo River.

The park has been closed since early April because of the virus. The park service says day access will resume for private and commercial floating on the river, all trails within the park except for the Lost Valley Trail, and limited restroom facilities.