CLARKSVILLE, Ark. — The Boston Mountains in northwest Arkansas are subtle features as mountains go. They don’t loom across the plains like the Rockies or overshadow the piedmont like the Appalachians. These mountains, with some of the highest summits between those two more famous ranges, have a hidden grandeur that sneaks up on you.

Instead of soaring peaks that define the landscape from afar, steep valleys emerge suddenly from behind the curves of winding mountain roads. Down wooded paths, sandstone platforms extend into the air atop eroded columns that seem barely capable of holding them in place. Waterfalls cascade into secluded pools. Wild elk call from the hills and amble across open fields. And because the area is home to huge swaths of protected land, most of it can be explored free of charge.

Frontier settlers named these the Boston Mountains — not because of any connection with Massachusetts but because of the area’s challenging terrain. To Westerners of the day, the word “Boston’’ was shorthand for any very difficult thing. One 19th-century stagecoach passenger who crossed the region declared that many hills and roads in the Northeast were “pimples and sandpaper compared with the Ozark ranges,” which reach higher than 2,500 feet in places. 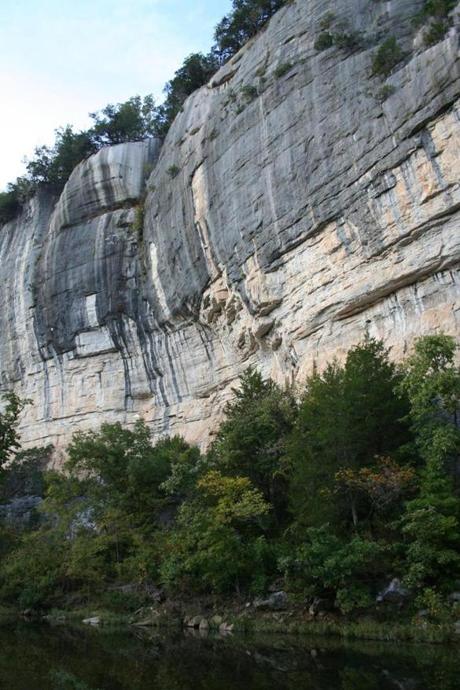 BRAD SCRIBER FOR THE BOSTON GLOBE

The stark face of Roark Bluff along the Buffalo National River.

Ambitious hikers can tackle the area’s landscape with a multi-day trek up and down the steep slopes of the 165-mile-long Ozark Highlands National Recreation Trail. But luckily, family-friendly day hikes will take you to the most iconic sites, including Pedestal Rocks and Whitaker Point, known affectionately as Hawksbill Crag for the birdlike shape of its profile.

Even a tour by car will serve up more than its fair share of vistas since almost every road carries some sort of scenic route designation. The most well known is the Scenic 7 Byway, which runs north from Interstate 40 to Jasper, a logical base for exploring the Buffalo River area. Cliff House, six miles south of Jasper, has rooms that directly overlook the state’s Grand Canyon. In town, the Arkansas House Inn’s Boardwalk Cafe serves an organic-focused menu with entrees made from locally-raised, free-range elk and buffalo and locally-trapped razorback.

A short drive west from Jasper will bring you to Lost Valley, where you can squeeze through a passage in a cave at the end of an easy mile-long hike to find a hidden 25-foot waterfall. Nearby you can make the roughly 4-mile round-trip hike to Hawksbill Crag.

After these hikes, pull to the side of the road in the Boxley Valley just south of Ponca at dusk to watch the elk emerge — the region’s top wildlife-spectator event. A herd of about 500 animals thrives here thanks to repopulation efforts in the 1980s. In the fall breeding season, the sound of bulls bugling to attract mates and scare off rivals fills the valley. On weekend nights stop at the Low Gap Café on the drive back to Jasper for dinner on the covered patio complete with live mountain music.

Jasper and its surrounding areas are home to some of the most stunning natural sights, but the entire range is worth exploring.

In the Arkansas River Valley that parallels Interstate 40 you will find a cluster of vineyards, anchored by Wiederkehr Wine Cellars. Founded in 1880 as the eighth bonded winery in the country, Wiederkehr continued producing during Prohibition thanks to an allowance for sacramental wine. The original cellar is on the National Register of Historic Places and offers free tastings and tours.

North of I-40 to the west, the Boston Mountains scenic loop starts by taking you up a former stagecoach route along Highway 71 past Lake Fort Smith State Park. Originally a Depression-era Works Progress Administration project, the park serves as the western trailhead for the Ozark Highlands National Recreation Trail.

The recently built Interstate 540, the other half of the scenic loop, offers stunning views as well. It doesn’t allow you to pull off the road for pictures, but it will bring you to Bentonville, birthplace of the Walmart empire. The first Walton’s five and dime storefront is preserved here and serves as a museum celebrating Walmart founder Sam Walton. The front counter is full of nostalgic toys and candies, and the museum exits through a soda shop at the corner of Central Avenue and Main Street in the town square.

The jewel of Bentonville and the other Walton family legacy is the two-year-old Crystal Bridges Museum of American Art, showcasing a world-class collection of works by American artists from Thomas Cole to Andy Warhol. Free to the public thanks to underwriting from Walmart, it has already welcomed a million visitors.

History buffs may want to venture east to Pea Ridge National Military Park, site of a battle that beat back Confederate troops and kept Missouri in the Union.

Tourist trap buffs may want to continue to Eureka Springs, a town founded around waters believed to have healing properties, now busy competing with itself for the attention and dollars of out-of-towners. Alpine themed inns intermingle with Old West restaurants, hippie chic boutiques, go-kart courses, and more than one musical revue. At the edge of town the king of local spectacle is a seven-story statue of Jesus that anchors a Bible theme park where a troupe performs an outdoor Passion Play from May to October.  Visit Eureka Springs

Route 23, known as the Pig Trail Scenic Byway, will lead you back from Eureka Springs to the understated rural landscapes at the heart of the region, like the tiny farm village named Boston near the headwaters of the Kings, Mulberry, and Buffalo rivers.

The region’s waterways typically run deeper after healthy rains in the spring and summer, making them easier to explore. But you may also choose to head down in late October when paddling is less crowded and the hillsides are carpeted with color amid the change of seasons. Whenever you’re ready, the biggest little mountain range you’ve never heard of will be waiting.